At least 60 people have been killed in a series of car bomb attacks and shootings in mainly Shia districts of Iraq’s capital Baghdad, officials say, reports BBC online.

Worst hit was the northern district of Husseiniya, where two explosions in quick succession in the evening near shops and restaurants killed nine.

Near-simultaneous blasts in nearby Talbiya, Sadiya in the west and the central area of Karrada left 19 dead.

Another seven were shot dead by gunmen in the city’s south earlier on Tuesday.

Such violence is occurring every few days in Iraq, with the death toll reaching a level not seen since 2008. More than 800 people were killed in August alone, with Baghdad province worst affected.

Most attacks appear to be the work of Sunni militants linked to al-Qaeda.

Some of the wounded were crawling to distance themselves from the blaze, leaving a trail of blood behind them”

The series of car bombings tore through Baghdad early on Tuesday evening, as many of the city’s residents went out to shop, have dinner or meet in public spaces.

In Husseiniya, a Shia area on the northern outskirts of the capital, two car bombs exploded near restaurants and shops.

“I saw a fireball and a huge cloud of smoke. We couldn’t approach immediately fearing a second bomb, but we could hear the screams of people asking for help,” policeman Ali Jamil told the Reuters news agency.

“A minute later a second blast happened nearby. Bodies were lying on the ground and some of the wounded were crawling to distance themselves from the blaze, leaving a trail of blood behind them.”

A row of restaurants and shops was also the apparent target of the car bomb in the Shia district of Talibiya. In Sadiya, a mainly Sunni area, six people were killed by two explosions near a police station, while a blast near an ice cream shop in Karrada also killed six. 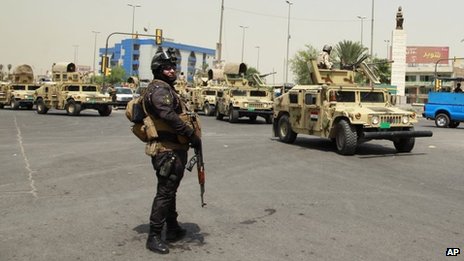 Earlier on Tuesday, four bodies with gunshot wounds to the back were reportedly found on streets in different parts of the capital.

Gunmen shot two other people in the southern Shia area of Dora, and a member of an Awakening Council – a Sunni militia set up to combat al-Qaeda-linked insurgents – was also killed along with his wife and three children in a southern suburb of the capital.

Sectarian violence has surged in Iraq in recent months. More than 5,000 people have been killed and 12,000 injured since January, according to the United Nations.

The recent unrest was sparked by an army raid on a Sunni Arab anti-government protest camp near Hawija in April. The protesters were calling for the resignation of Shia Prime Minister Nouri Maliki and denouncing the authorities for allegedly targeting the minority Sunni community.

The country has also seen a spillover of violence from the conflict in Syria, where jihadist rebels linked to the Islamic State of Iraq, a Sunni militant umbrella group that includes al-Qaeda, have risen to prominence.

Syria has also exacerbated sectarian tensions, with Iraq’s Shia majority largely siding with the Alawite-dominated government, and Iraq’s Sunnis backing the rebels, who are drawn mostly from Syria’s Sunni majority.

In recent weeks, Iraqi security forces have reportedly arrested hundreds of alleged al-Qaeda members in and around Baghdad as part of a campaign the Shia-led government is calling “Revenge for the martyrs”.

But the operations, which have taken place mostly in Sunni districts, have angered the Sunni community and failed to halt the violence.