A UK watchdog has threatened action against video game app-makers it finds to be in breach of consumer protection laws.

The Office of Fair Trading (OFT) is concerned about in-game charges, saying it had seen evidence of “potentially unfair and aggressive commercial practices” after studying 38 popular titles. It did not say which they were.

Children might be particularly susceptible to such tactics, it warned.

As a consequence it has proposed new guidelines for developers.

These would apply to both apps and internet browser-based video games available via Facebook and elsewhere. 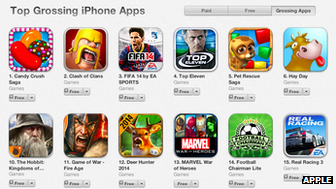 The OFT said some of the worst examples it had seen involved games that led children through an adventure but then withheld a promised reward until they spent money, and instances where the title made the player feel bad by telling them a virtual animal was “ill” but could be made better if the gamer made a purchase.

“I don’t think children are always aware that when they click ‘yes’ it’s spending money,” Cavendish Elithorn, executive director at the OFT, told the BBC.

“Although parents can change their device settings to deal with some of that, many parents might not know, or it’s only when they get the bill that they realise the setting was wrong.

“So, part of what we’re keen to do is support parents in having the right tools to be aware of what their children are doing online.”

He added that the OFT has the ability to take legal action against firms in the UK, and was working with partners in Europe, North America and Australia to try and get the same rules applied elsewhere.

So-called freemium games – where the original download is given away free of charge, but the player is encouraged to buy add-on items or services – were pioneered in Asian markets as a way to combat piracy.

They have since spread to the west with EA’s Fifa 14, Disney’s Where’s My Water, King’s Candy Crush Saga and Sega’s Sonic Dash among popular titles to adopt the model.