A new way of scanning the heart can identify those who may be at high risk of a heart attack, early tests suggest.

It can identify dangerous plaques in the arteries which nourish the heart. If a fatty plaque ruptures, it can lead to a clot, blocking the flow of blood.

Scientists at the University of Edinburgh said an effective tool for predicting a heart attack would make a “massive difference” to patients.

Experts said it was an exciting start.

More than 100,000 people have a heart attack in the UK each year and disease of the arteries around the heart is the leading cause of deathin the world.

The researchers used a radioactive tracer which can seek out active and dangerous plaques. This was combined with high resolution images of the heart and blood vessels.

The overall effect is a detailed picture of the heart with the danger zones clearly highlighted. The technology is already used to detect tumours in cancer patients.

The first tests of the technique for danger spots in the heart were on 40 patients who had recently had a heart attack.

The scan highlighted the plaque which caused the heart attack in 37 of the patients according to a study published in the Lancet medical journal.

It is the first time a scan has been able to identify danger zones but further tests are needed to see if detecting dangerous plaques before, rather than after, a heart attack has the potential to save lives.

“I suspect not all plaques detected will cause a heart attack, but it could be useful for identifying high risk patients who need aggressive therapy,” cardiologist Dr Marc Dweck told the BBC.

This could include drugs such as statins or aspirin, drastic lifestyle change or even inserting stents into the arteries to keep them open. 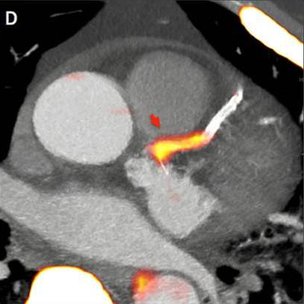 The researchers will look at high risk patients, including those about to have surgery, to see if the scan can save lives.

Dr Dweck said if this scan or similar ones proved successful it would make a “massive difference”.

He said: “Heart attacks are the biggest killer in the Western world and there is no prior warning, the first time people know about heart disease is when they have a heart attack.

“If we can treat and stabilise the plaques then we might be able to prevent heart attacks and stop people dying.”

Prof Peter Weissberg, the medical director of the British Heart Foundation, said: “Being able to identify dangerous fatty plaques likely to cause a heart attack is something that conventional heart tests can’t do.

“This research suggests that PET-CT scanning may provide an answer – identifying ‘ticking time bomb’ patients at risk of a heart attack.

“We now need to confirm these findings, and then understand how best to use new tests like this in the clinic to benefit heart patients.”

Prof Andrew Morris, the chief scientist for health in Scotland, said: “These are exciting data – being able to prospectively identify patients at the highest risk of a heart attack and provide treatment to prevent this would be a significant step forward.”