Scientists believe they have discovered a new reason why we need to sleep – it replenishes a type of brain cell.

Sleep ramps up the production of cells that go on to make an insulating material known as myelin which protects our brain’s circuitry.

The findings, so far in mice, could lead to insights about sleep’s role in brain repair and growth as well as the disease MS, says the Wisconsin team.

The work is in the Journal of Neuroscience.

Dr Chiara Cirelli and colleagues from the University of Wisconsin found that the production rate of the myelin making cells, immature oligodendrocytes, doubled as mice slept.

The increase was most marked during the type of sleep that is associated with dreaming – REM or rapid eye movement sleep – and was driven by genes.

In contrast, the genes involved in cell death and stress responses were turned on when the mice were forced to stay awake.

Precisely why we need to sleep has baffled scientists for centuries. It’s obvious that we need to sleep to feel rested and for our mind to function well – but the biological processes that go on as we slumber have only started to be uncovered relatively recently.

Dr Cirelli said: “For a long time, sleep researchers focused on how the activity of nerve cells differs when animals are awake versus when they are asleep.

“Now it is clear that the way other supporting cells in the nervous system operate also changes significantly depending on whether the animal is asleep or awake.”

The researchers say their findings suggest that sleep loss might aggravate some symptoms of multiple sclerosis (MS), a disease that damages myelin. 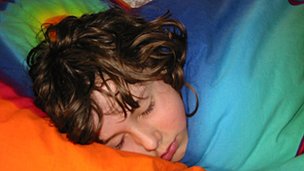 In MS, the body’s immune system attacks and destroys the myelin coating of nerves in the brain and spinal cord.

Future studies could look at whether or not sleep affects the symptoms of MS, says Dr Cirelli.

Her team is also interested in testing whether lack of sleep, especially during adolescence, may have long-term consequences for the brain.

Sleep appears necessary for our nervous systems to work properly, says the US National Institute of Neurological Disorders and Stroke (NINDS).

Deep sleep coincides with the release of growth hormone in children and young adults. Many of the body’s cells also show increased production and reduced breakdown of proteins during deep sleep.

Since proteins are the building blocks needed for cell growth and for repair of damage from factors like stress and ultraviolet rays, deep sleep may truly be “beauty sleep”, says NINDS.