Twitter says it plans to join the stock market in the most hotly anticipated flotation since Facebook’s last year.

Referring to the official paperwork needed to join the market, the company tweeted: “We’ve confidentially submitted an S-1 to the SEC for a planned [initial public offering].”

Twitter gave no further details as to the timing or price of the offering.

The microblogging service is on track to post $583m in revenue in 2013, according to advertising consultancy eMarketer, up from $288m in 2012.

Most of Twitter’s funding comes from advertising, with companies paying for “promoted tweets” that appear in users’ Twitter feeds.

But some analysts believe the risk for Twitter post-flotation is that if the drive for greater advertising revenue leads to increased numbers of adverts in and around the site, they could become intrusive and unpopular with users.

“There’s a few issues [such as] how many revenue streams can be developed beyond just advertising, the impact of more people accessing the service via smartphones,” said Colin Gillis, a New York-based technology specialist at BGC Partners.

Nearly two-thirds of users access Twitter via mobile devices that have traditionally been difficult for advertisers to reach.

This is one reason why Twitter has acquired MoPub, a mobile-focused advertising exchange, for a reported $350m.

“Twitter was more or less a mobile-first platform from the start and so the company built its experience to work relatively well across devices,” Clark Fredriksen of eMarketer told the BBC.

“Ultimately, they did a good job of monetising their mobile user base.”

“Twitter is one of the last of the major developed social networks to file [for an initial public offering or IPO] – we’ve already had Facebook and LinkedIn,” said Mr Gillis. 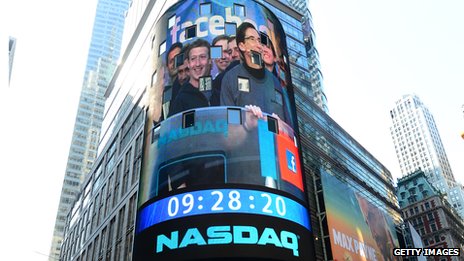 Demand for Facebook shares was high when they first listed, but the share price has disappointed investors since then

Facebook listed on the stock market in May last year. Although it initially created excitement among investors, its share price performed poorly, before recovering this summer.

The timing of the IPO is likely to be related to renewed activity in stock market flotations. There have been 131 IPOs priced so far in 2013, according to IPO tracking firm Renaissance Capital – a 44% increase on the same period last year.

Activity is climbing back towards the pre-financial crisis levels of 2007, says Renaissance.

Andrew Frank, social media expert at technology research company Gartner, said: “[The IPO] gives its investors a way to get some of the money back that they put into the company at the beginning.

“It gives the employees a similar kind of event to reward them for the success they’ve had so far. And it gives Twitter itself extra funds to invest in new projects and innovation.”

Mr Gillis said it was impossible to say how great the demand for Twitter shares would be until the company released a valuation.

Analysts say Twitter must continue to innovate under the scrutiny of public ownership.

“One of the things they will have to focus on is making sure that they keep their users very actively engaged,” Nate Elliott, an analyst at the tech consultancy Forrester, told the BBC.

“One of the things Facebook has done very successfully over the past year-and-a-half has been to show that not only is the number of users growing, but that those users are becoming more active.”

Twitter’s tweet announcing its filing immediately went viral – it was re-tweeted more than 8,000 times within an hour of its posting.

For many users, it seemed apt that the company would use its own platform to announce the news.

Once a company has filed paperwork with US regulators for a planned IPO, it enters a so-called “quiet period” when it is not allowed to speak to the media.

According to the Securities and Exchange Commission’s website, a company can file a confidential prospectus for a public share sale if it is classified as an “emerging growth company” with revenue of less than $1bn.