William and Kate pictured with Prince George ahead of tour

An official photograph of Prince George with the Duke and Duchess of Cambridge has been released ahead of their tour of Australia and New Zealand.

The eight-month-old is pictured in his mother’s arms while Prince William holds their dog, Lupo.

In the image, taken by royal christening photographer Jason Bell, the family is looking through an open window at their Kensington Palace home.

The Cambridges are due to arrive in New Zealand on 7 April.

They then fly to Australia on 16 April and their three-week tour ends on 25 April.

In the new image, the blond baby prince is wearing a pale blue jumper bearing his name, while his mother wears a cream-coloured blouse and his father a shirt with rolled-up sleeves.

Prince George, who is third in line to the throne, is not looking directly at the camera like his parents – instead, he is smiling at the black cocker spaniel next to him.

Other than a glimpse of the curtains, little of the Cambridges’ renovated Kensington Palace home can be seen in the photograph.

It is the first official picture of Prince George to be released since his christening last October. 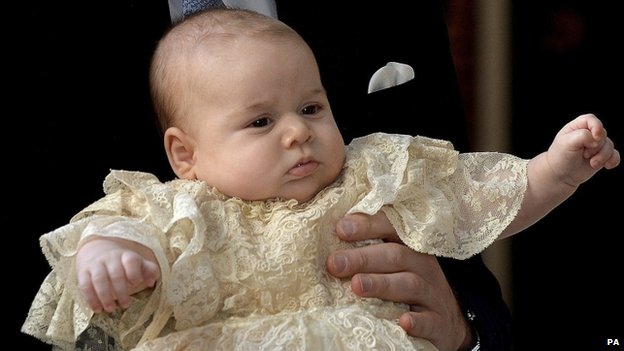 Prince George was christened at the Chapel Royal in St James’s Palace, London, in October

The tour will begin in Wellington, where the Cambridges will be greeted with a ceremonial welcome to New Zealand, called a Powhiri in Maori.

They will see a yacht race, visit a rugby stadium and a vineyard, and there will also be Maori engagements in Christchurch and Dunedin.

During their time in New Zealand, they will attend a ceremony in Blenheim to recognise the sacrifice of members of the Australian and New Zealand armed forces in the First World War.

There will be a similar commemorative ceremony in Canberra, Australia.

Their Australian itinerary includes visits to Uluru in the Northern Territory, as well as Sydney and Adelaide.

The duke and duchess will also visit an area of the Blue Mountains, New South Wales, that was hit by bushfires last October.

Prince William has made a number of official trips to Australia and New Zealand in the past, but Catherine is yet to pay an official visit to either country.

The couple passed through Brisbane airport on their way back to the UK at the end of their South Pacific tour in September 2012, however.

The duke had paid an official visit to New Zealand and Australia in March 2011. He went to Christchurch shortly after it suffered an earthquake and also visited Queensland and Victoria, which had been hit by floods.

It is the third joint official trip abroad for the duke and duchess, following a visit to Canada and the US in July 2011, shortly after they were married, and their South Pacific tour.

His images from the christening included one of the young prince with his father, grandfather Prince Charles and great-grandmother, the Queen.